Into the Blue at the Singapore Airshow 2014

Because for me it’s mandatory to include Kylie’s latest single somewhere in the post title.

Okay so it’s the Singapore Airshow 2014! I won tickets! Such a cheapskate it’s only SGD 22.00 per adult. Lol. My wallet has been paper thin recently so winning tickets to the airshow was a delight! Thank you U.S. Embassy – Singapore.

The last time I visited an airshow was when I was a kid on Okinawa. I remember the U.S. air force planes on the tarmac. I remember it was like a carnival with lots of that “All American” vibe like hotdogs and burgers… and since it was in Japan… there were five or six sticks of steaming yakitori dipped in sauce inside these little Coca-cola paper cups. 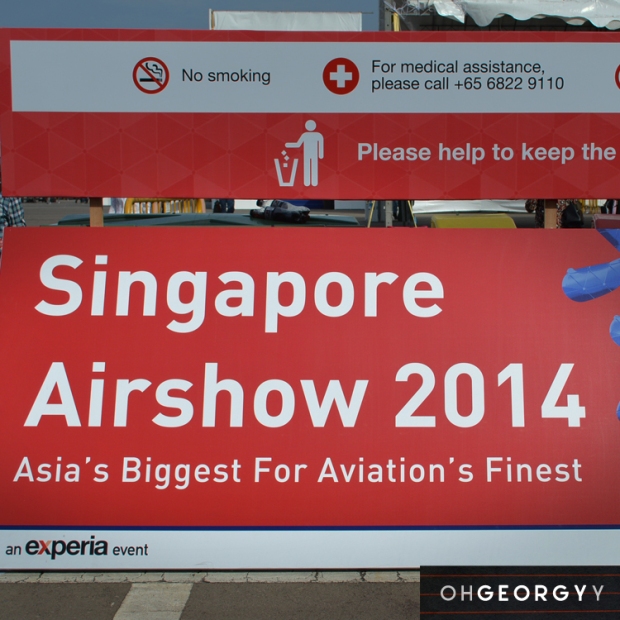 The Airshow happens every two years and this year they sold/gave out about 80,000 tickets. The the airshow spans about a week but the public display happens only during the weekend. Ticketholders are to proceed to Singapore EXPO (Expo MRT) where shuttles will take everyone to the venue near Changi Airport.

I noted that the airshow shuttles were quite efficient. Everything felt so systematic and well-organized. However, I read some people were not aware that tickets could not be purchased at the gate. Tickets needed to be purchased in advance because they probably have crowd control issues.

By the time we reached the venue, the airshow was already halfway through. Oh well! So I barely got any photos of the planes doing different manoeuvres.

When the planes were up in the air I lost track of my boyfriend. Lol. Nawala na lang bigla. Yun pala nag-i-Instagram siya sa isang sulok. Okay… was hoping we could steal a kiss as the planes zoomed high above us. He owes me a kiss!

And within five minutes it had ended. The ROKOF (Republic of Korea Air Force) Black Eagles and USAF (United States Air Force) C-17 had performed for thirty minutes and we missed most of it. Ugh! But it’s okay… I came here to see the planes on display. Let’s see what else happened. 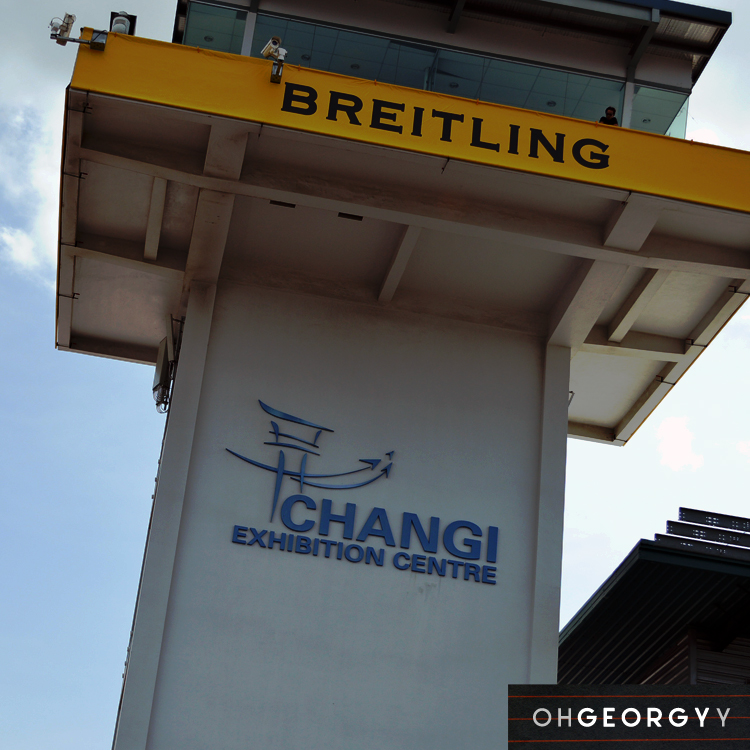 As soon as the airshow finished, people started to herd towards the shuttles that were leaving the complex. We made our way to the aircraft displays. The tarmac was filled with helicopters, private jets, and military aircraft from different countries but mostly from the United States. Singapore’s aircrafts were on display of course. And IAI drones! Wow. I never knew they were that big. I used to imagine them being the size of remote-controlled toy planes.

We passed by several private jets like Cessna’s. These were not only on display for the public… they were also available for private buyers.

Since we viewed the aircraft around 4 o’clock in the afternoon, there weren’t too many people. Or perhaps, the crowd was a fraction smaller than the morning ones. There were queues though at the aircraft photo ops and the planes that you could enter. I think mostly this is a great for little kids and for aviation enthusiasts. For us, we just wanted to spend the day-after-Valentine’s enjoying the tarmac. 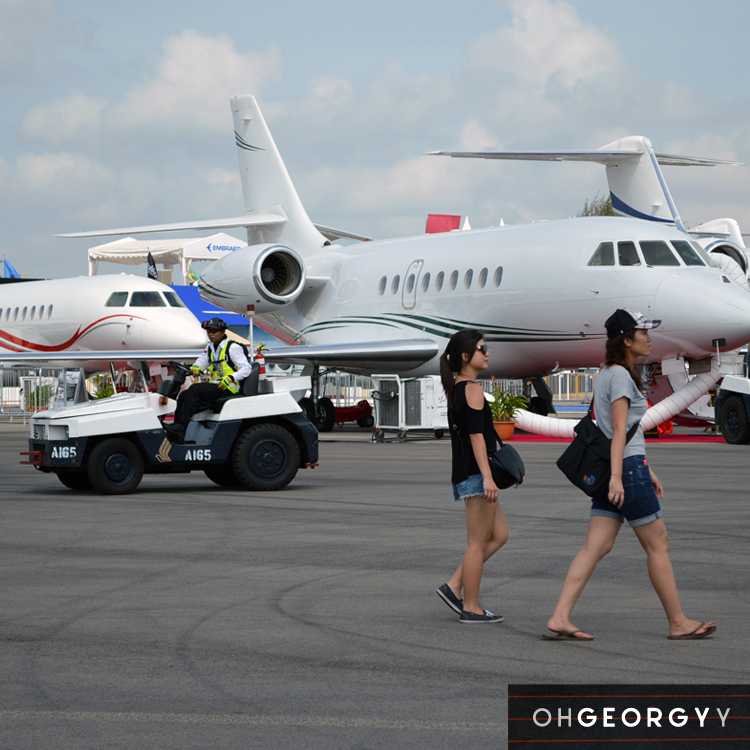 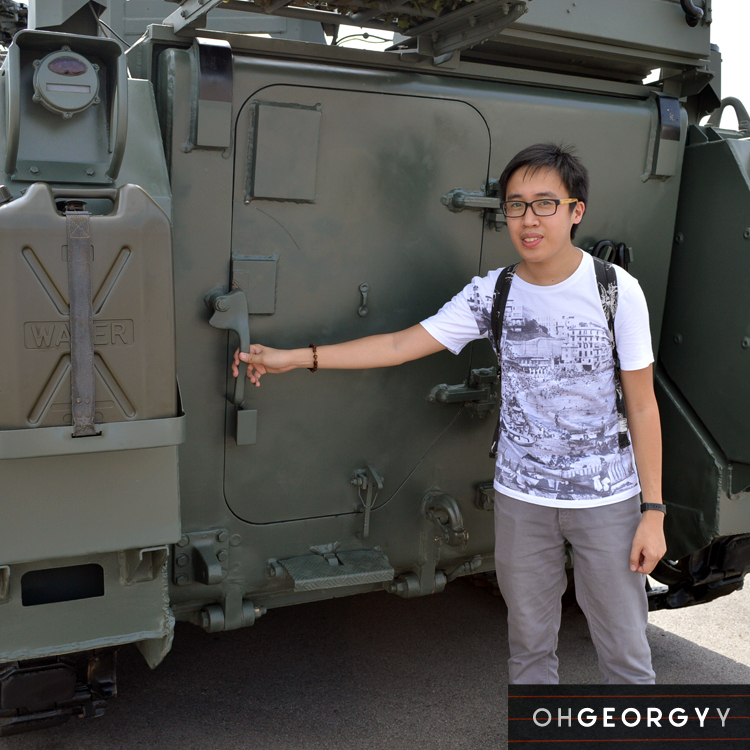 The RSAF (Republic of Singapore Air Force) had their own air-conditioned pavilion which was basically like a mobile museum showcasing their history, development and technology. I have to say, it feels like one of those award-winning displays. There were opportunities to meet the officers and have photos with them. Interactive areas kept young ones entertained… like an F-15 simulator and a Mini Theatre. It’s pretty awesome. 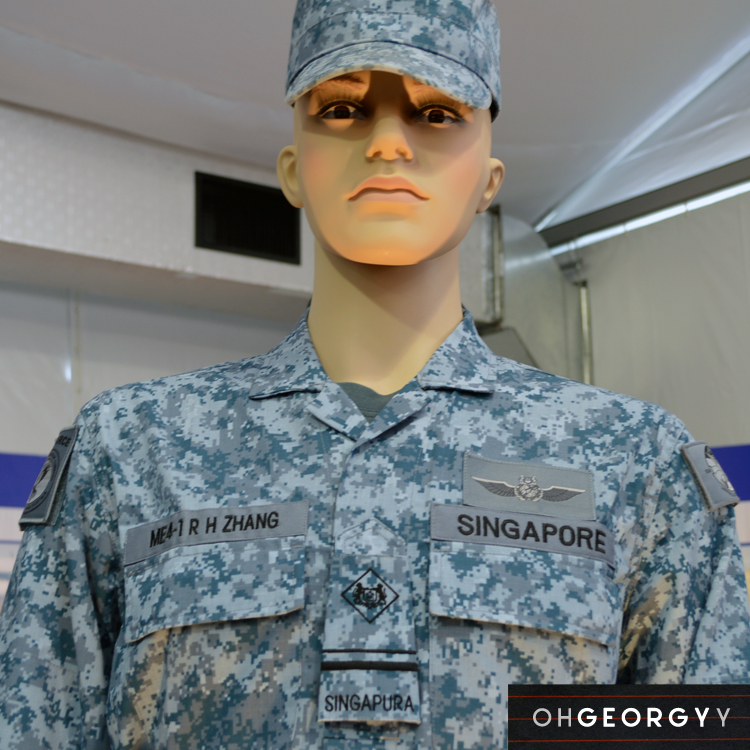 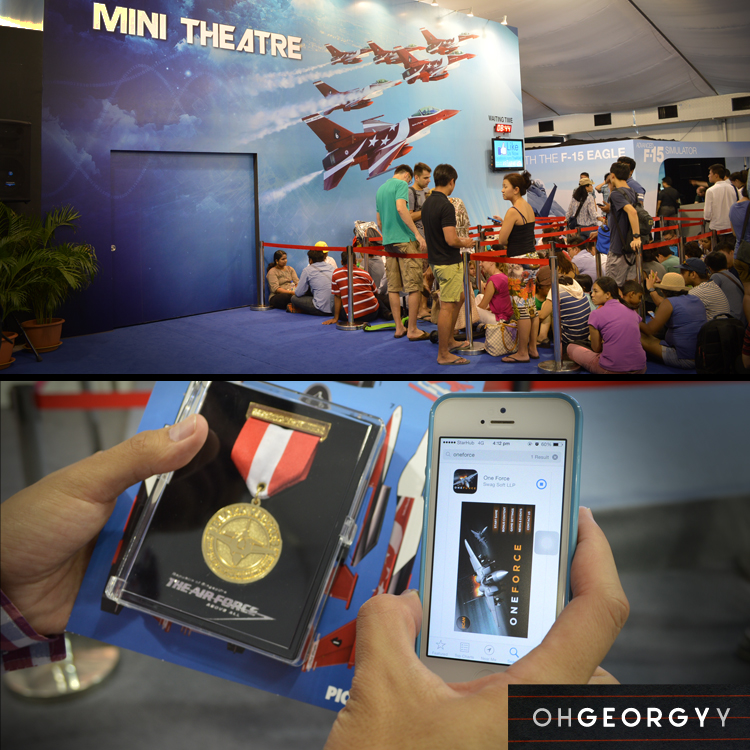 There’s this one booth where all you have to do is downoad the “One Force” app on your smartphone and you can collect a medal.

I couldn’t help myself. Oh, and it appears he’s a Captain! 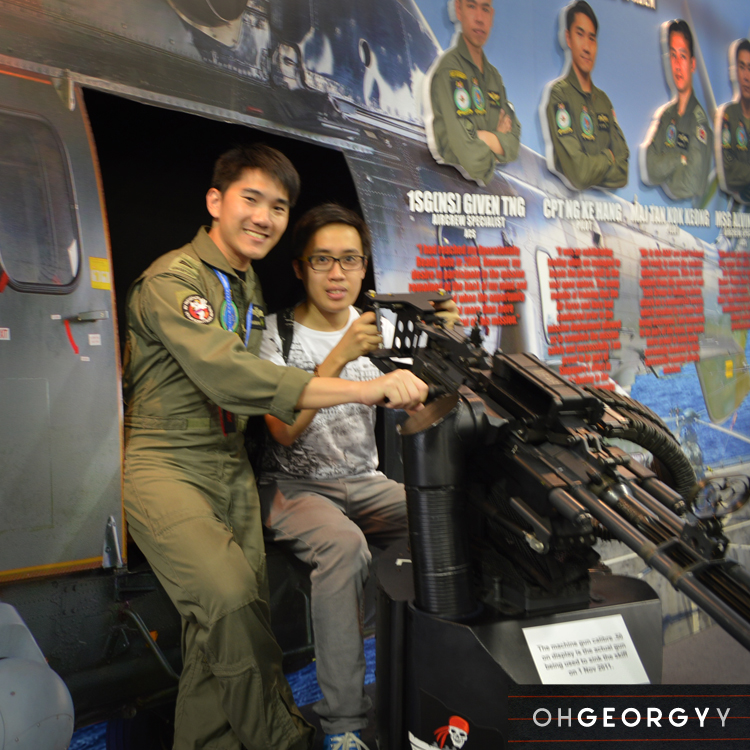 After the RSAF pavilion, they give out these kits which are RSAF bags, pins, and fans. Grabe daming pera, may libreng bag na and x4 pa ibibigay sayo. Everyone is so equally friendly.

We made our way to the USAF aircraft displays. Go US Air Force!

First, the largest we saw there was the massive C-17A “Spirit of Kamehameha”.

Behind it were other aircraft that apparently came from, surprise… Okinawa, Japan! From Kadena AB where I used to attend airshows as a kid. I got to shake hands with one of the US military personnel and he confirmed he’s stationed on Okinawa. 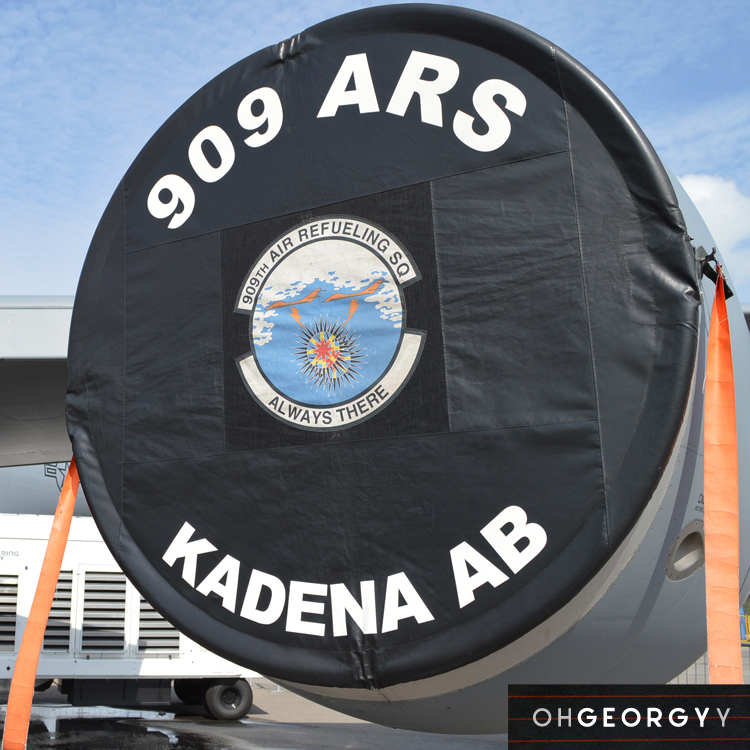 And… the Osprey! It can land or take off like a helicopter… but work like a turboprop plane too!

There were also these awesome planes I’d never seen before. Looked quite space age! 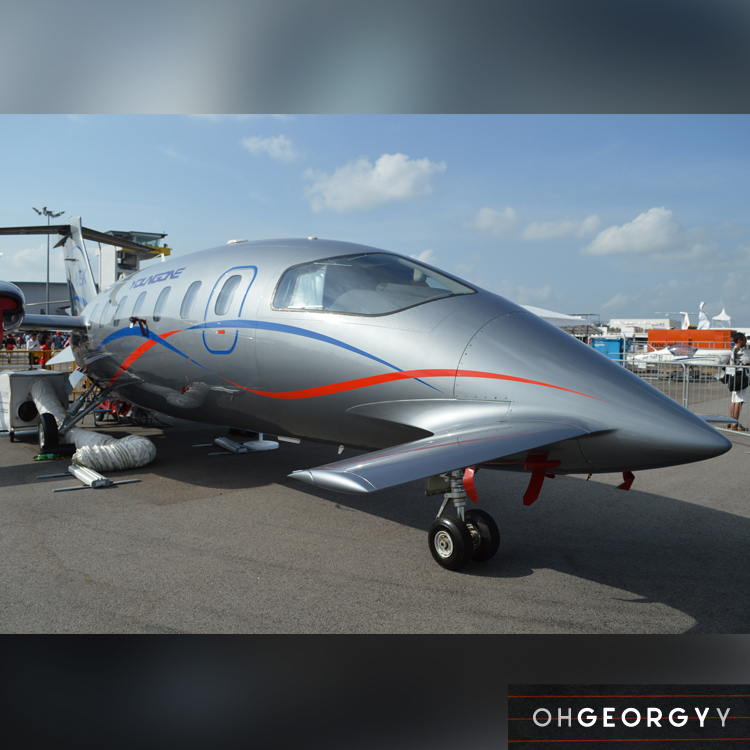 And more admiring of not just aircraft… 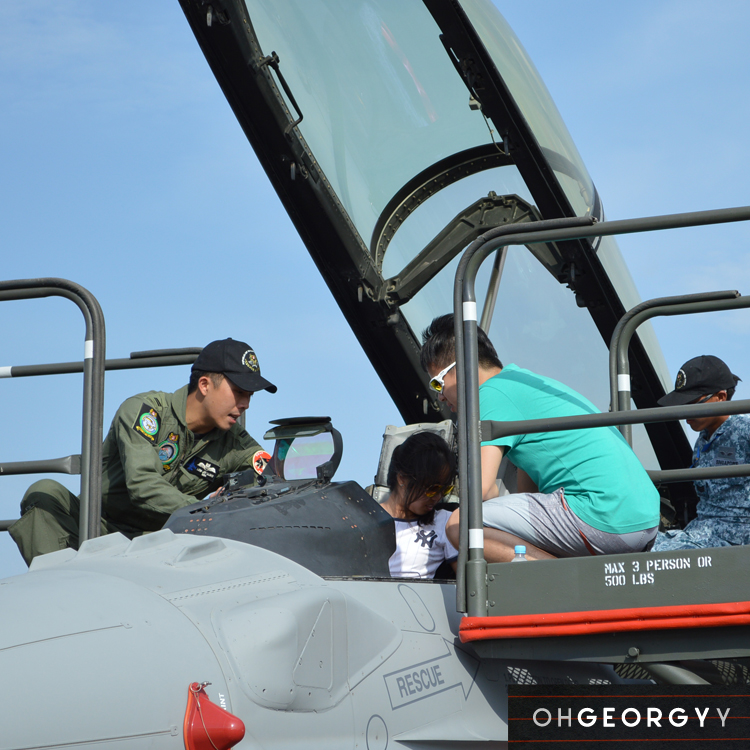 But the pilots that handle them. 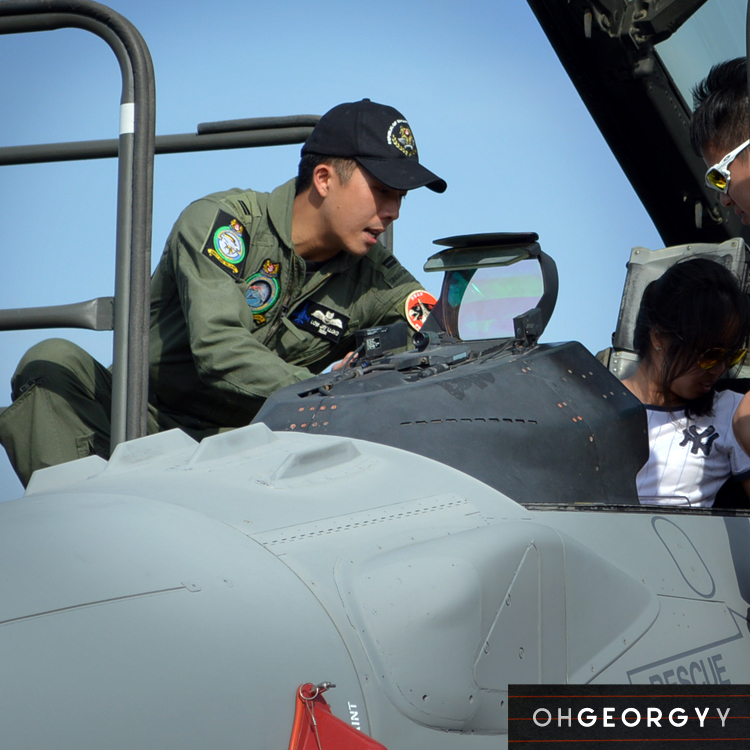 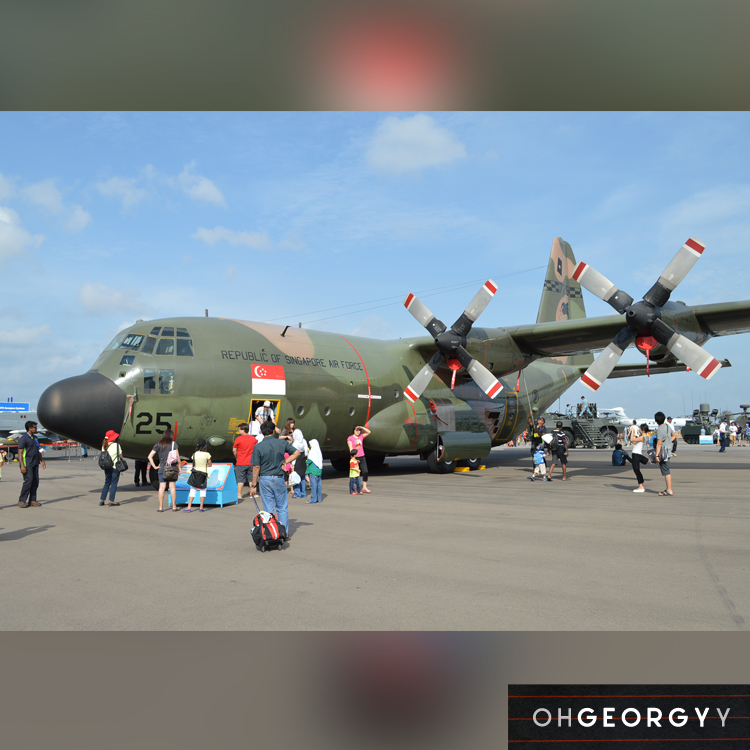 Food options were available at the visitor’s tent where you could pick up sodas and snacks. By the time we had reached, they were closed already. We also didn’t get to check out the other displays inside the airshow main pavilion where generals, defence ministers, VIPs had met during that previous week to ink deals. 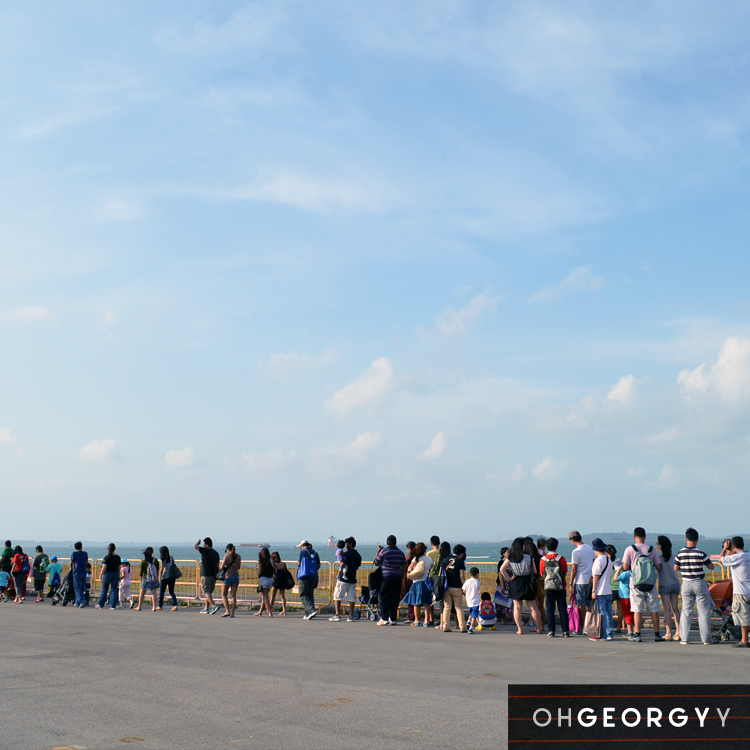 There were lots of people but I was very impressed with how the crowd was handled. The shuttle buses were not run-of-the-mill old school buses… they were SMRT bendy buses that came in numbers… it felt like an infinity transportation loop which kept the queues moving. Impressive, the event deserves a feature on one of those National Geographic shows. Thanks again U.S. Embassy – Singapore for picking me and my partner to watch the show! I was touched by the thoughtful note you sent over.

Like Loading…
← Flashback Friday No. 8 – Yishun
→ My Experience: Annual Report 2014 at the Bureau of Immigration in Manila