It has a nautical theme! Compass Point is a mall in Sengkang. I have never been to Singapore’s northeast regions (Kovan, Hougang, Buangkok, Sengkang, and Punggol) until earlier today. I noticed that the connection between the MRT and the LRT is easier (unlike in Choa Chu Kang).

Singapore’s northeast towns are stringed together by the purple North-East Line (NEL) which cuts through Singapore from Punggol all the way to Harbourfront (passing through Little India, Dhoby Ghaut, and Clarke Quay). It is Singapore’s first entirely underground MRT line (the Circle Line and Downtown Line followed in recent years).

Compass Point felt like a children’s museum because the walls had educational panels on them. The mall has a theme that is apparent as you enter. Though the mall opened in 2002, it has a 1990s vibe to it. (Not that I was in Singapore in the 1990s, but the mall felt a bit dated compared to malls you would see elsewhere in Singapore). 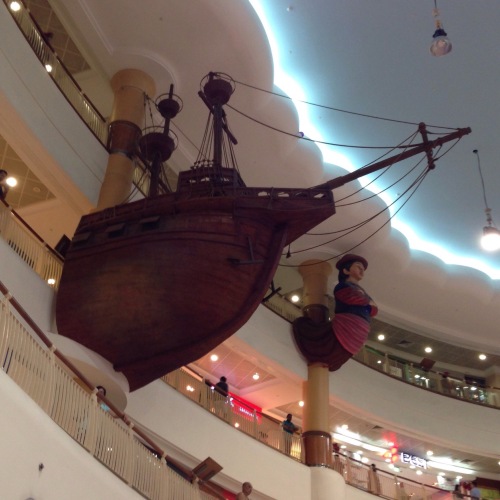 We took the LRT from Sengkang to Farmway. Wow, an LRT station called Farmway! Farmway LRT is walking distance to the Anchorvale Community Club where a dragon boat race was held earlier. The LRT is more of a local area transport that uses small trams. As of this writing, there are three LRT systems in Singapore: Sengkang, Punggol, and Choa Chu Kang. I think they are developing plans for one in Jurong.

Like little kids we were. Eyes wide-open. Taking photos of the LRT like a bunch of first-timers. (We were, technically!)

Great to step foot in northeast Singapore where there are baby trees and brand new HDBs rising everywhere. I noticed how the new HDBs are designed. Bigger windows (floor to ceiling?), brighter exteriors. Taking the LRT was an added treat.

Oh, and they have a waterpark inside the community center at Anchorvale! Or is that the Sengkang Swimming Complex? Nifty.

2 thoughts on “So this is what Compass Point looks like”

Welcome to my blog! My name is George and I work in media relations. I write about my life in Singapore which includes stories about food, sightseeing, sports, and more.