A Filipino Expat Blogger in Singapore – Travel and Lifestyle Blog

At one point this weekend I thought I was going to die.

The category 1 “cat 1” lightning siren was blaring out mid-way through our Saturday water training. We were exposed over the Kallang Basin. We saw a few strikes of lightning in the distance. I heard a couple “oooohs” and “aaaahhhs” from fellow paddlers as if we were watching fireworks. WTH!

I felt hopeless. I was in an uncontrollable situation. No escape button! I’m one paddler on a boat of about twenty people. It’s difficult to face these situations when you have anxiety. Naisip ko… if I was going to die by a bolt of lightning, at least I die while paddling.

When the situation deteriorated (= more beautiful lightning), our two FDS boats sought shelter under the Sheares Bridge to ride it out.

I DID NOT FEEL SAFE!

We even had selfies… maybe to provide a sense of calm.

After about ten minutes, the sirens stopped and we started paddling back towards our beach. While doing so… we saw lightning in the distance, again and again.

This was where I couldn’t handle the anxiety.

I couldn’t look further than the shoulders of the paddler in front of me. I was fucking scared! Would I survive a lightning strike if it hit the other end of the boat? How about my eardrums? Would a bolt cause an explosion and toss all of us out into the river? Is there a camera out there taking a video of what could happen to us? Would we be featured in The Straits Times as the boat that got toasted? Lightning can strike even in clear sky. Lightning can strike even if they just switched the signals off. Is what we are doing safe?

We made it back closer to shore… and to my surprise, we continued with our training program. I tried to remain calm.

That same afternoon was the year-end party of the international dragon boat community (IDBC). I attended with my batchmate and wow… the succulent tender juicy meat was ENOUGH to lift my spirits up again.

The food was fantastic! The music was awesome (BACKSTREET BOYS!). The expat crowd was rowdy = fit for partying. There was a fog machine. OMG German Dragons Singapore, the hosts… we had fun!

While in the shower on Sunday afternoon… I was thinking what if lightning did strike us… and tossed all of us into an alternate reality where we continue to remain alive… AND able to book movie tickets to see Mockingjay Pt. 2.

The rest of my weekend involved wrestling with a burger at Carl’s Jr. and struggling to eat crispy nachos during all the quiet scenes in The Hunger Games finale.

My weekend in 6 photos: 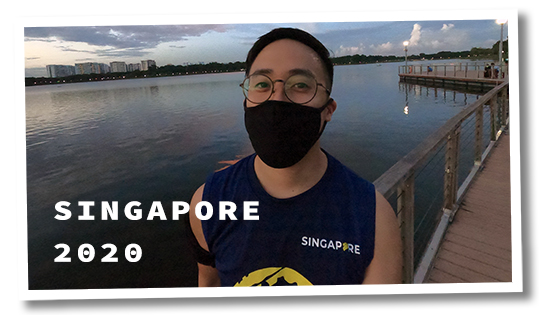 My name is George and I'm an American-born Filipino that's called Singapore my home since 2012.

I moved to this beautiful island city to continue my career as a TV producer. Through the years I've tried new and exciting hats from dragon boat paddler to content marketer. Today, I get to work with journalists through a media intelligence firm.

Singapore Kuya – it’s a practical guide to living and working in Singapore for Filipinos and friends. Bookmark SingaporeKuya.com