The route this year for the 10km run was better. There were less crazy turns. Last year it felt like we all had to squeeze into the park connector (imagine the width of a slightly larger sidewalk). 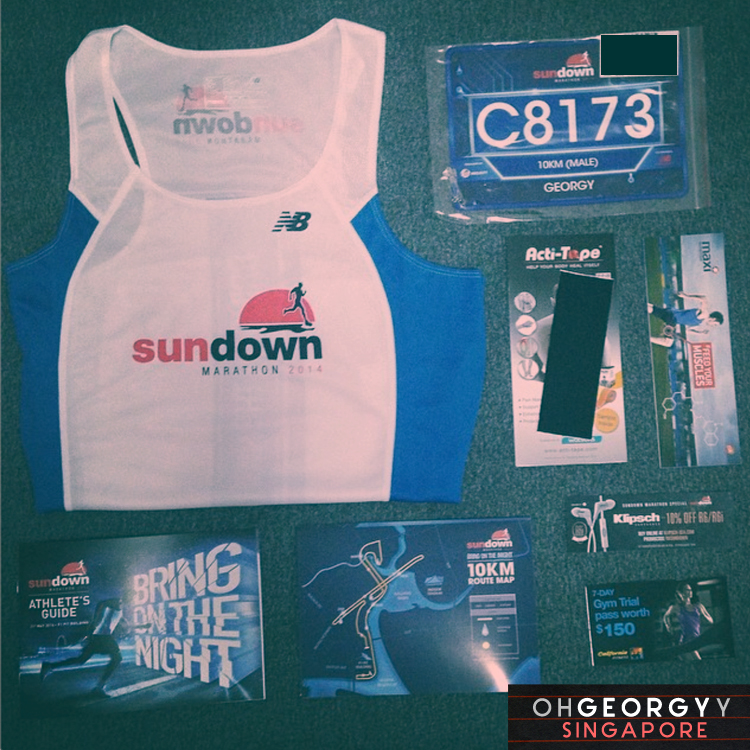 Other awesome things this year:

On top of that, I clocked in at 1:22 for 10km. It’s slow! I’m aware of that. But it’s the first time I ran with more consistency and energy. I think I could have finished faster because it was a tight squeeze at the beginning of the race. I’ve never run with the herd before haha. Last year I started late so it felt like I had the whole street to myself.

Overall this was the most enjoyable race I’ve joined so far. Even more than the Standard Chartered. I guess seeing the bright city lights gleaming over Marina Bay (or Kallang River) made it magical. I ran several times in May this year (like the Green Corridor Run) so I had plenty of energy. I have a third 10km run in a few weeks at Jurong Lake.

The original 10km route map involved heading towards Lavender. I think this was similar to last year’s route. The organisers changed it due to public demand if I’m not mistaken. 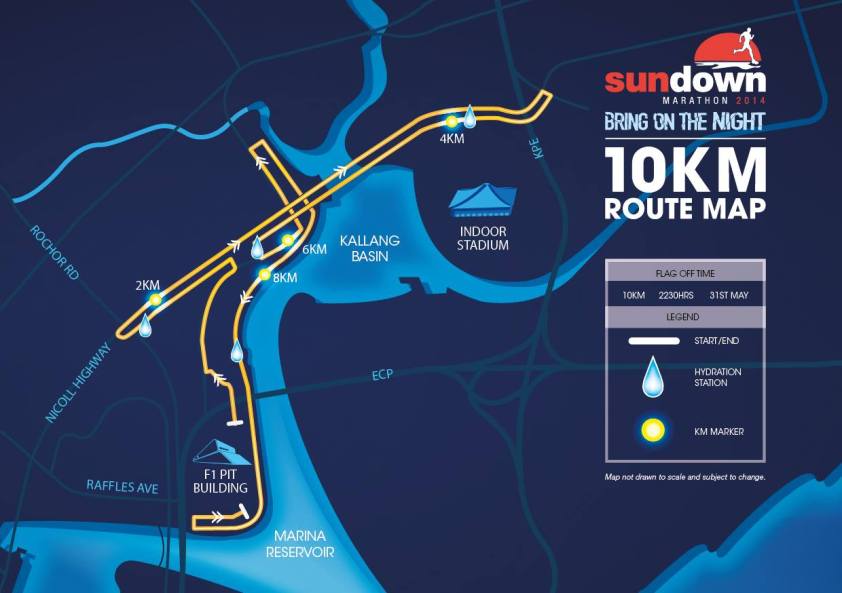 The map above was the final 10KM route on May 31, 2014. Flag-off was at 10:30pm. Below is a map of the area that was removed (circled in red). They expanded the route towards the east making for a less curvy run.

Hopefully next year I can give the 21KM half marathon a try. Below is a map of how it looked like this year. It involves going around Marina Bay (Gardens by the Bay, Marina Bay Sands, Esplanade, etc.) which makes it more urban. Must be beautiful. 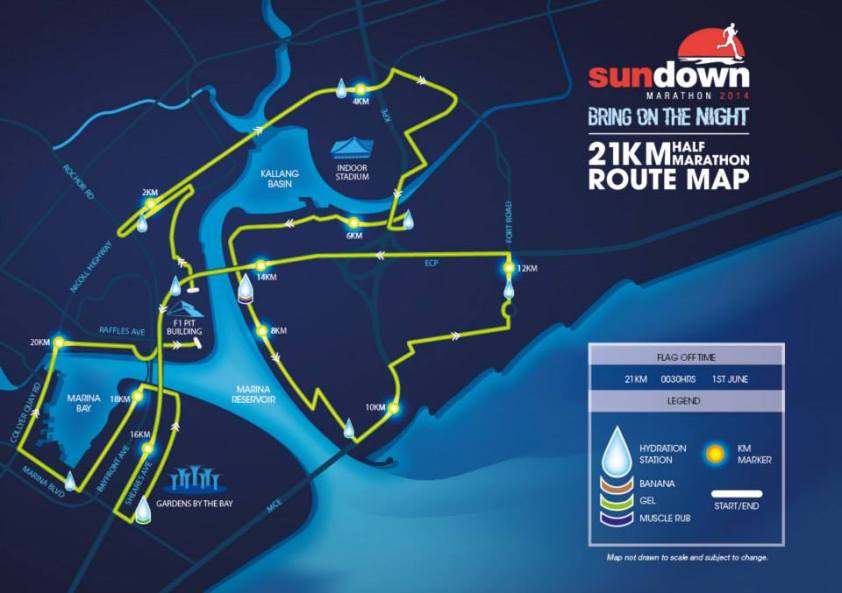 Below is the 42KM full marathon route map which is similar to the half marathon but involves running along the East Coast. I heard that it started to rain during the wee hours of June 1.

This was my 2nd year to do the 10KM Sundown Marathon. I’m excited to try the HM next year.

The rest I shall leave in photos: 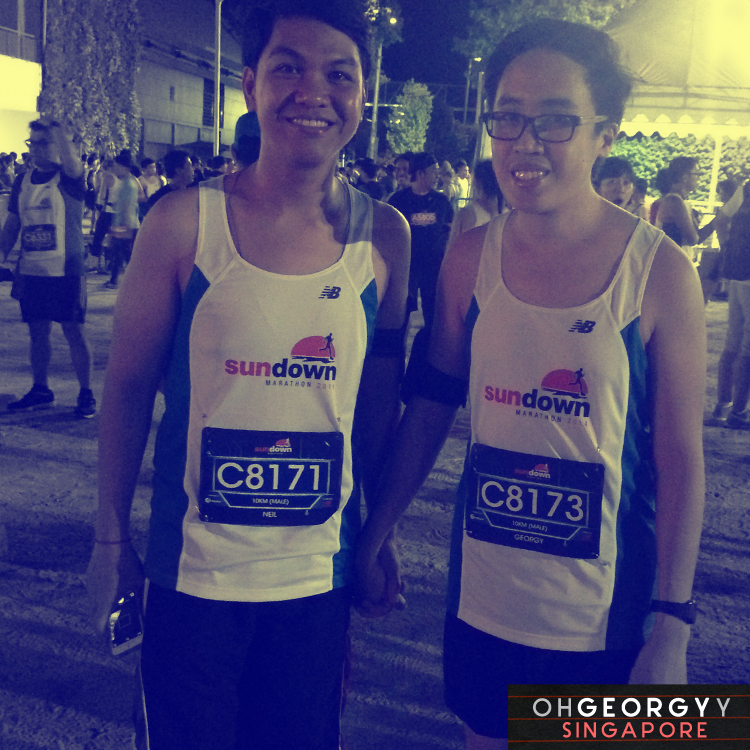 Excited for the race.

N and I commuted from Bishan. We took the MRT to Promenade. 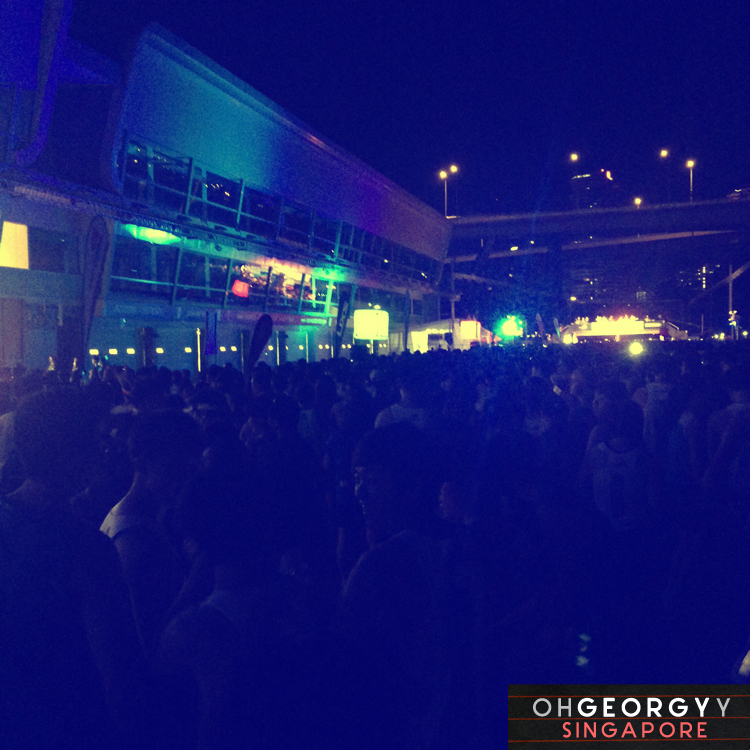 The starting pen. My last photo before the race.

The start and finish of the race is at the F1 Pit near the Singapore Flyer. 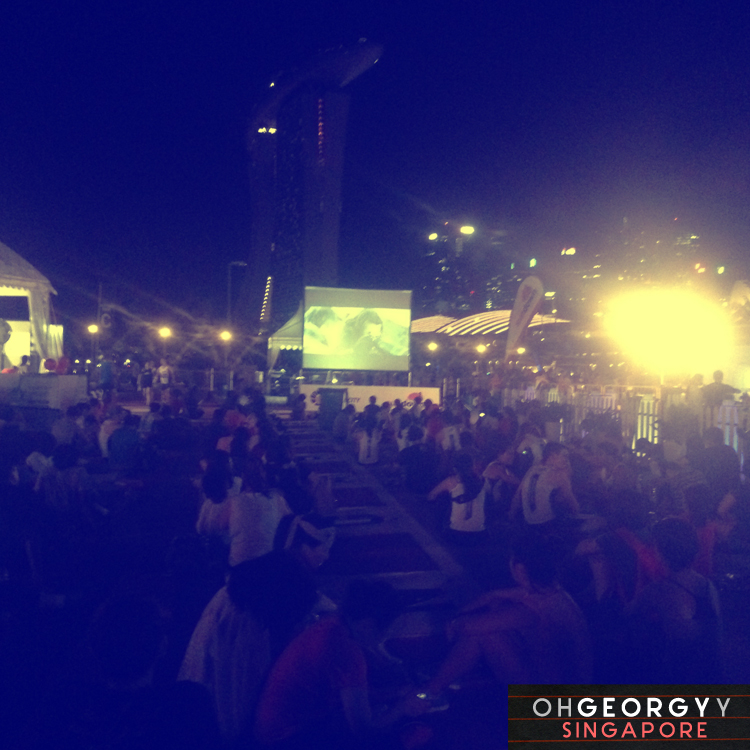 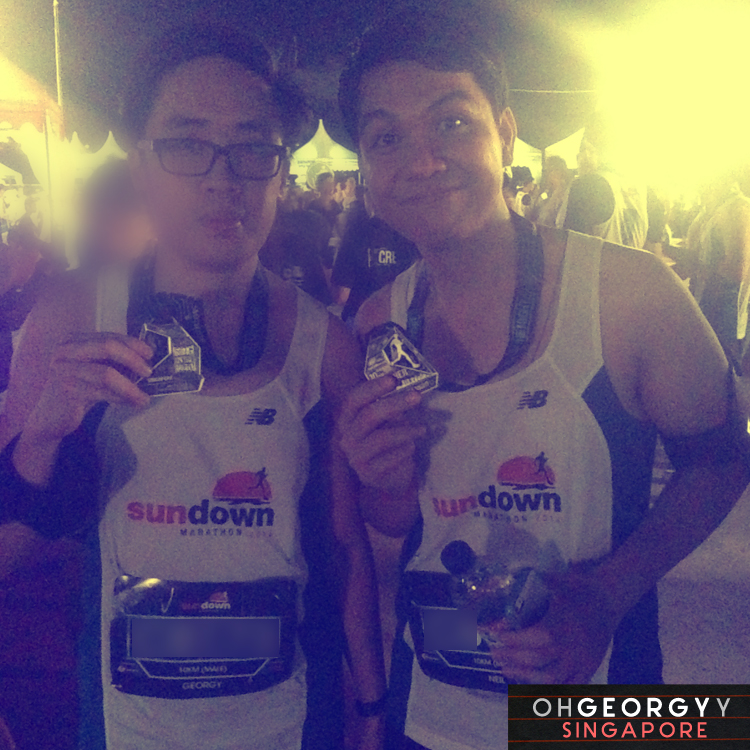 Intentionally BLURRED out the photobomber behind me lol

10km finisher. I’ll try the Half Marathon next year. 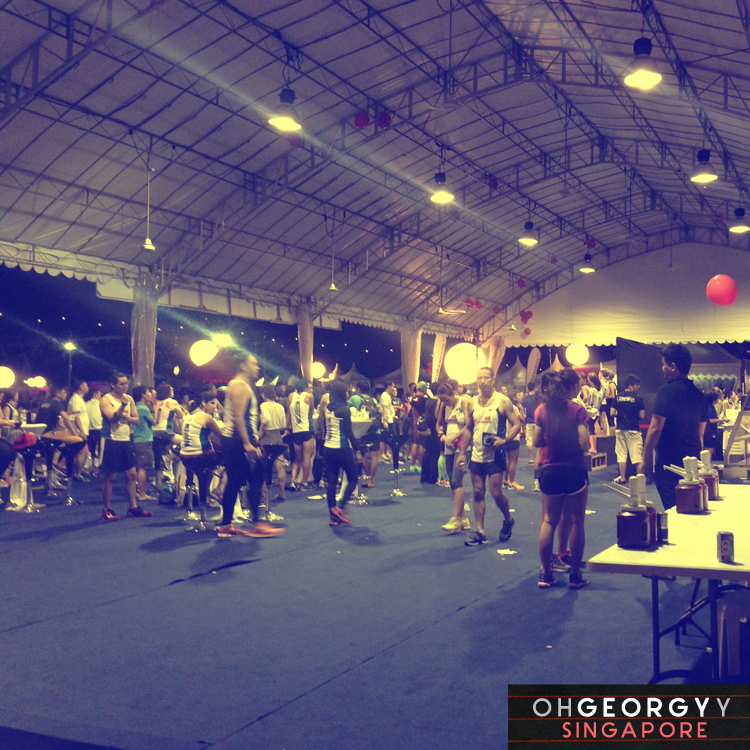 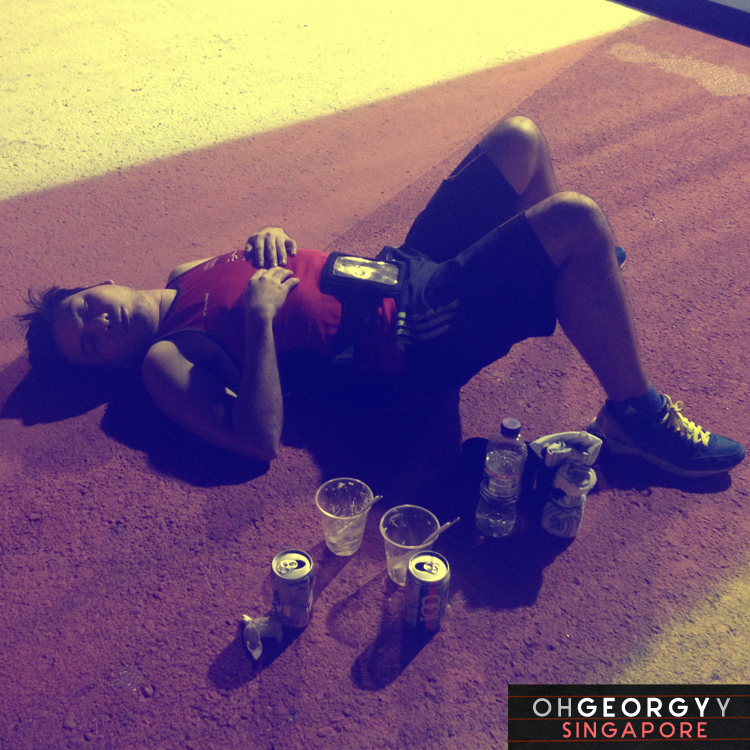 Someone’s sleepy at 1 o’clock in the morning.

Suzie at the Sundown Marathon podium.

We were waiting for the 10km crowd to clear. It’s hard to grab a cab after the race. So we stayed a bit longer. 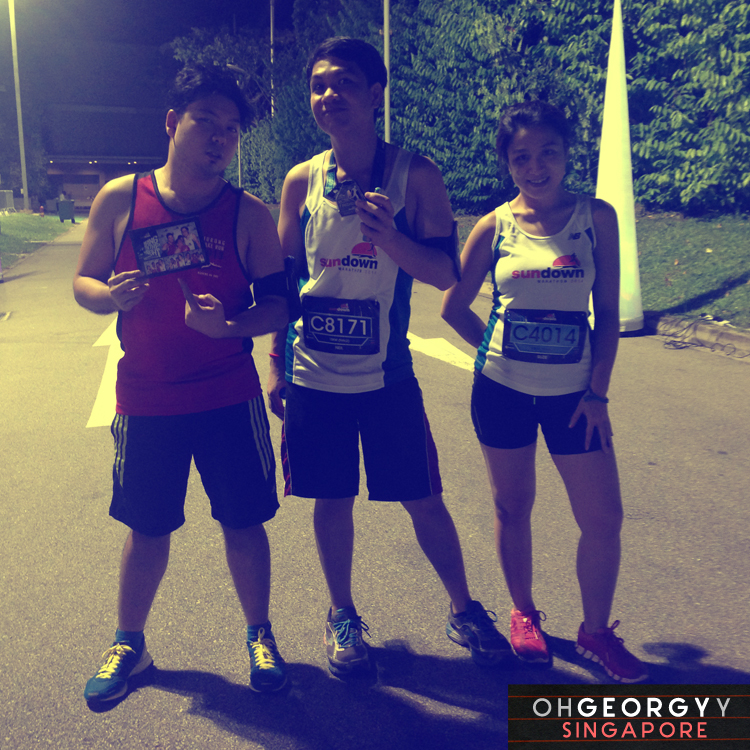 Headed to the taxi stand. 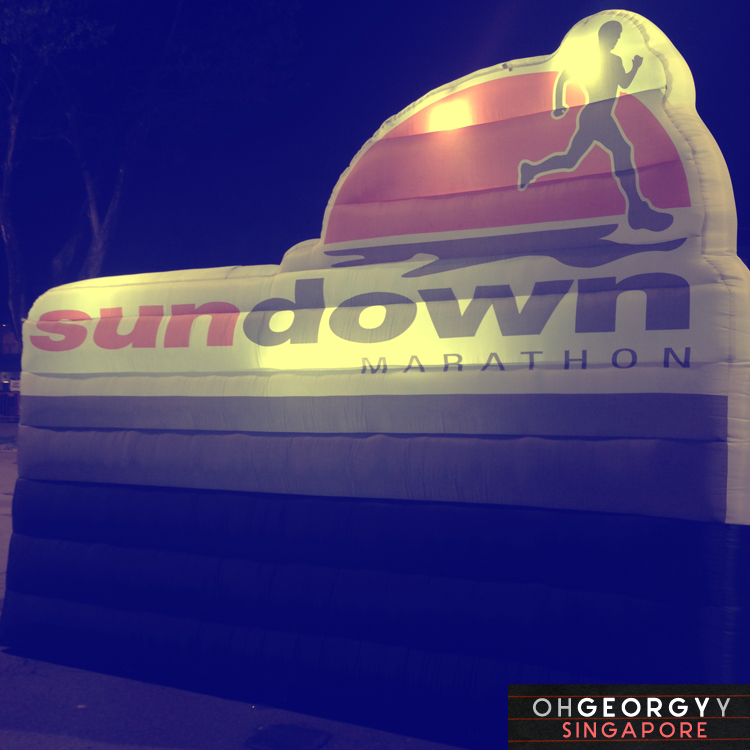 Thanks Sundown Marathon for the awesome race.

Hitting the pavement again at the Jurong Lake Run 2014 in June. It will be my last 10km run. I’m planning to do the Standard Chartered Marathon Singapore 2014 half marathon in December… and several other half marathons in 2015.